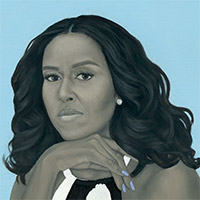 i Aug 5th w No Comments x by bonepress911

A collection of brilliant poems that speak to and about former First Lady Michelle Obama. Spanning themes of family, art, gardening, and race, they are as lighthearted as they are heavy. American Herstory is the winner of the inaugural Backbone Press Chapbook Award. 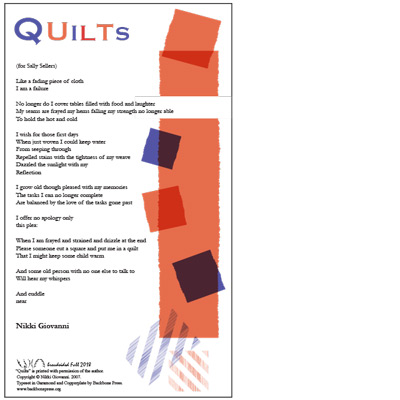 “Quilts” is printed with permission of the author. 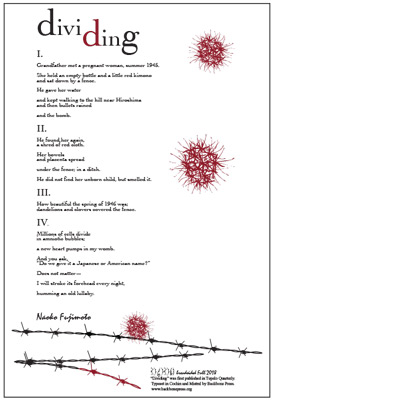 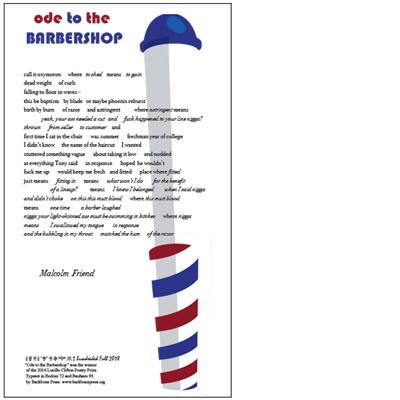 Ode to the Barbershop

“Ode to the Barbershop” was the winner of the 2016 Lucille Clifton Poetry Prize. 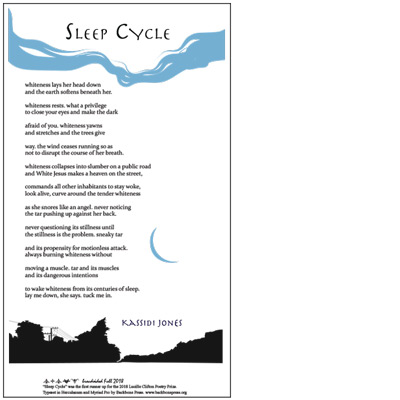 “Sleep Cycle” was the first runner-up for the 2018 Lucille Clifton Poetry Prize. 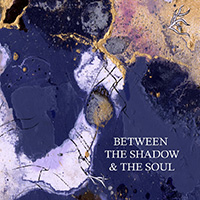 Between the Shadow & The Soul

i Oct 2nd w No Comments x by bonepress911

Gomaa’s first chapbook of poetry is elegant yet visceral, a quiet punch. It serves as a map to define womanhood, precisely Muslim womanhood. 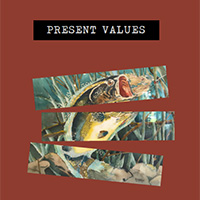 To confront the moral errors of what is perceived honestly, but is also beloved, respected, and deservedly admired! Present Values is a brave book, as well as an intelligent and beautiful one. I suspect that few people could have written it. 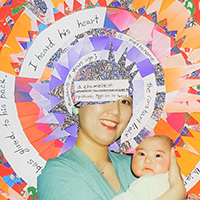 Mother Said, I Want Your Pain

In Naoko Fujimoto’s “Mother Said, I Want Your Pain”, there are rooms without doors nor windows. Time becomes ecstatic and intimate. The reader walks into these rooms allured by the unadorned but skillful language, the spectral beauty of the imagery and the haunting narrative of emptiness. 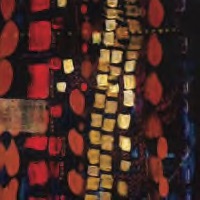 The Riddle of Longing

i Nov 3rd w No Comments x by bonepress911

In form and free verse, Faisal Mohyuddin delivers truth on behalf of the displaced. In The Riddle of Longing polished and powerfully controlled poems make you want to scream in frustration at the unjust world, but they also enlighten us. 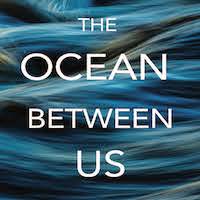 The Ocean Between Us

i Nov 3rd w No Comments x by bonepress911

Beatriz Fernandez artfully weaves together dazzling imagery and alluring sounds to create concrete visions of Puerto Rico, Florida, and a geography of loss. With the ability to use the perfect words to describe imperfect times, she poses questions that pierce the human spirit. 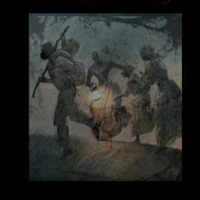 Like a traditional griot, Cynthia Parker-Ohene creates a world of wonder(ment). “Core Black Lives” are depicted in striking images that highlight places and pieces of history. The poems in Drapetomania are composed of a lush, crisp language that allows the reader to inhabit lands where “sons will not be stopped by 5 0” and where “dna leaches into birchbark.” Raw and polished, truth and sardonic, these poems unabashedly shine “in the stubborn light.” 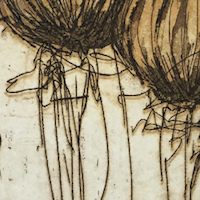 Memory of a Girl

In Memory of a Girl, memory loss is magnified through narrative poems wrought with intimate, familial Japanese terms & cultural customs. There’s the anguish of witnessing and caring for someone losing memories, but along with despair and frustration, Brockman extols the grace, bond, and strength that lingers through debilitation. She is an elegant storyteller. 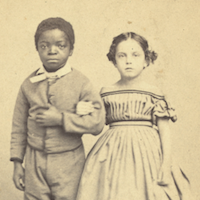 With big guts Counts writes poems that are vivid—the language, sometimes a distinct mixture of empathy and gore. On subjects of hip-hop influence, the trans-Atlantic slave trade, and his sparse Central District “Love Story” postcard poems, he is resolute in his depictions and accounts of dearth and inner-city blues. Strange-tongued Names represents an eloquent reflection on urban life. 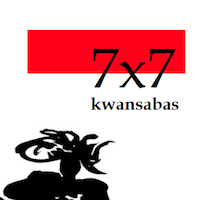 7×7 kwansabas brims with flashes of imagery. Words slam into each other as if in a race against time to define the characters she embodies her poems with. She primes her pen, revealing intricate details into the lives of the famous. The likes of Katherine Dunham, Tupac Shakur, Michael Jackson, and Kareem Rashad Sultan Khan rise up on the page, allowing the reader to discover and rediscover them. 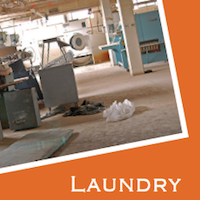 Laundry is a stunning poetry chapbook, filled with memorable characters and tons of artful turns of phrases. The narrative language never stops short or becomes laborious to read. Mangel has chosen a difficult subject matter to explore––prison life, and in particular, she deftly delves into the nature of hate crime within the prison system she imagines. She does so with aplomb, never resorting to cliché. 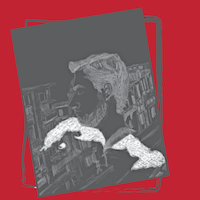 In the Land of Tropical Martyrs

Though In the Land of Tropical Martyrs is a chapbook, it has the heft and authority of a full volume of poetry. Each of these poems is rich with the ache of urgent memory, living memory, memory that sings as the opposite of nostalgia and wakes us more fully to our own lives. ~Michael Hettich, author of Systems of Vanishing and The Animals Beyond Us 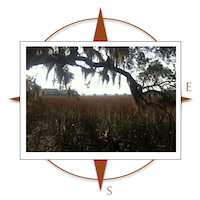 …Daye writes of his home in the south, his family, his loves and losses, all with a grace and accuracy of image and language. Daye sings of hurricanes and hydrangeas, pond fishing, sun tea and the North Star, “that doesn’t lead to freedom anymore/ but you can follow it and still get killed.” ~Dorianne Laux, author of Facts About the Moon and The Book of Men 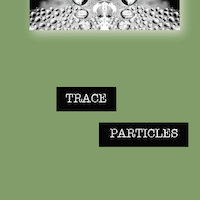 …poems that are both smart and sensitive, Joseph sings of America’s promises, those broken, those kept, and
those just recently made. These are the poems of America’s heartland and America’s heart. ~Gerry LaFemina, author of Notes for the Novice Ventriloquist. 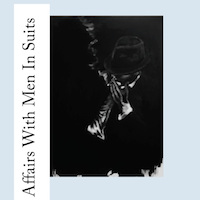 Affairs With Men In Suits

With exquisite wit, Eric Tran turns the dirty secret of being in thrall to the creepiest guys into a wrenching meditation about power and its inexhaustible allure. ~Paul Lisicky, author of Unbuilt Projects

i Apr 4th w No Comments x by bonepress911

We are pleased to announce the winner of the 4th Annual Lucille Clifton Poetry Prize. Our final judge, Reginald Dwayne Betts selected:  Ode to the Barbershop by Malcolm Friend. See his comments below:

“In these times of turmoil – maybe I should just say in America – the experience of black folks has often been relegated to one extreme or another. But the barbershop has always been something different: motley. Political and humorous. Dangerous and attentive to our vulnerabilities. Ode to the Barbershop captures that: “Call it oxymoron where to shed means to gain.” You hear that and recognize it, remember your last cut – maybe check your line up out in the mirror and make a point to visit the shop again soon. ~ Reginald Dwayne Betts
Ode to the Barbershop

falling to floor in waves—

this be baptism    by blade   or maybe phoenix reburst

yeah, your ass needed a cut   and      fuck happened to your line nigga?

stuttered something vague       about taking it low       and nodded

Malcolm Friend is a CantoMundo fellow originally from the Rainier Beach neighborhood of Seattle Washington. He received his BA from Vanderbilt University where he was the 2014 recipient of the Merrill Moore Prize for Poetry, and is an MFA candidate in Creative Writing at the University of Pittsburgh. He is also a 2014 recipient of a Talbot International Award for writing. His work has appeared or is forthcoming in publications including La Respuesta magazine, the Fjords Review’s Black American Edition, Alicante’s Información, Word Riot, The Acentos Review, Connotation Press: An Online Artifact, and Pretty Owl Poetry.